....enter if you dare....
Subkulture Productions...the longest running Gothic production in the Philippines.....it's other incarnation would be Eternal Death Wake, Faces of Rock and Children of Shadows...do click on the button to find out the latest news...

The Journey of The Lost 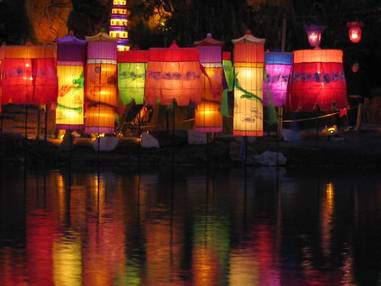 Tripping on The Light Fantastic!
I officially started my career in music as a music correspondent in which the attribute then was aptly named "contributing writer".  It was through Pearlsha Abubakar-Quebral and a quaint music and lifestyle magazine called "PULP" that got on a kick-start all because of an inquiry that I had with The Lotus Eaters before they had their concert here in 2002 which then started a wonderful friendship with it's two members, Jeremy Kelly and Peter Coyle.  I was covering the New Romantic or better yet known as the New Wave beat back then because this was the era that I grew up with however, my face has not marked any traces of any semblance in listening to other types of genre such as Ambient Music, Gothic Music and the breeds of evolution that spawned from it.   This was way back 2003 and I was 33 back then.  Too old?  No!  I was just starting.  I met a lot of distrust  and questioning looks from the scene because no one knew me from Adam.  Heck!  Someone even hacked into my email account back then and started posting hate messages on my behalf.  This was during the time that yahoogroups ruled the net waves as a form of communication.
Despite the disdain, there were still some that believed in what I can become.  Enter Subkulture Productions with Doi Porras and his lovely wife, Liza Gernan-Porras, and the creative genius of Aldelm John Grey - Sarthou Ferriols who led the Subkulture team back then.  I've learned a lot from the experience as I multi-tasked on being their Press Release Officer and the ticketmaster.  In the events and the studio productions that I have been with them, I have also learned the literal meaning of tech support wherein I had to hook which instrument to what and made sure that the soundcheck was alright and based on the music that they would play.  Todate, the band of Doi Porras which is Dominion still continues to produce great gothic music.  Aldelm John Grey - Sarthou Ferriols on the other hand retired from Funeral Frost and has evolved into a new dimension with his new band called Lintech.  Subkulture Productions continues to produce magical events such as the Philippines premiere gothic ball running nine (9) years now under the category Eternal Death Wake bringing in foreign bands and DJs like Roughausen, Psydoll, NecroKael, The Angina Pectoris, and at the same time exposing the best of Philippine Gothic bands and DJs such as  Das Machin who is also the incumbent operations manager for the production.  A welcome addition to note is Miggs Marfiori whose hands make everything in the production beautiful. Make no mistake about it though.....I AM STILL AND WILL ALWAYS BE A PART of Subkulture Productions.
My other affiliation would be with DMC Philippines under Speedy Gonzales aka Jesse Gonzales.  The original Station Manager of the defunct DWXB 102 and indeed, they were the station that dared to be different given the fact that they were the only ones who played an alternative form of music during the 80s in which some popular radio stations took cue in following from the music being played to the format that they have.  He was also the consultant of another defunct revolutionary radio station 89 DMZ Dance Music Zone.  I've taken everything that I've learned from Subkulture Productions and well, without much of the physical stuff.
It has been both a grueling and rewarding journey and I am thankful for the bands and the people who have trusted me all these years.  I've made friends, I've made enemies, I've made frenemies but I would never look back.  Life is about burning, rebuilding and forming bridges and this is what the scene has taught me.  Is it about the money?  It depends if you get paid...yes if I do and yes if I don't...it didn't matter but for as long as the trust is there, then I will continue on this journey and to wherever it takes me.  END OF STORY.
hostgator coupon codes